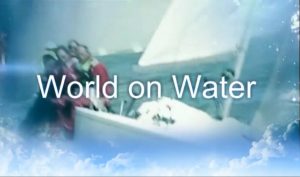 “World on Water” is a weekly global boating news programme which recently measured over 350,000 YouTube views and is still growing fast! http://www.boatson.tv

In this week’s WoW TV we were at Australia’s Whitsunday Sailing Club for their Airlie Beach Race Week with the fleet and the whales, the NYYC Multihull Regatta and the Gunboats, the 3017-18 Clipper Round the World Race started in Liverpool England, the classics were out in the Panerai Nantucket Regatta, Day 4 of the […]

In this week’s WoW TV we were exclusively on-board the Oatley family’s record breaking Super-Maxi Wild Oats XI during Audi Hamilton Island Race Week where she duelled with sister-ship maxi Black jack on the sparkling waters of the Whitsundays, the Sailing World Championships Test Event in Aarhus Denmark Day 5 the Final day, “How to […]

In this week’s “WoW TV” a skipper competing in the Clipper Round the World Yacht Race was airlifted to hospital after nearly ripping his thumb off. David Hartshorn had been leading a crew of amateur sailors when the accident occurred 450 nautical miles off the coast of Portugal. His thumb was almost taken clean off […]

In this week’s “WoW TV” the Maxi World Rolex Cup was run at the Yacht Club Costa Smeralda and we have two reports, the doors are closed at Persico Boat Builders in Italy but a new prototype yacht is being built as the core boat for the next Volvo Ocean Race after the 2017-18 edition, […]

“In this week’s “”WoW TV””: 2017-18 Volvo Ocean Race Pre-Start Skippers Press Conference where straight talking Aussie ex 18 Footer sailor David Witt calls the Volvo 65 “”Slow and Under-Powered”” Take that guys, at the start of their 45,000 mike race around the world. The thrilling start of the Volvo Ocean Race in Alicante Spain. […]

Day 4 wrap, Nathan Outteridge explains how they had the wrong foils, Peter Burling explains their “nosedive” and how they won with the right foils. Jimmy Spithill on what went wrong to their wing (sort of as in this event nobody is telling us anything and there is a lot of “foxing” going on). This […]

The Extreme Sailing series is off to the Madeira Islands, Loro Piana Super-Yacht Regatta and the beautiful yachts are out in full swing, Franck Cammas and his Groupama team bow out of the 35th AC, Day 2 of the Finn Masters in Barbados, Day 1 of the World Cup Series Final in Santander Spain, Days […]

In this weeks’ WoW the final two days reports from ETNZ and Artemis. ETNZ progress to the finals against the Australian led skipper Jimmy Spithill and his Australian/USA ORACLE Team,USA, Elise Beavis of ETNZ is a young Engineer and profiled here, the Medal Race of the Mens’ 49ers in Spain and French Vendee Globe sailor […]

Last week was a great week in the WoW as ETNZ won 4 races in the Americas Cup over Oracle Team USA on the trot, convincingly. the Rolex Giraglia Cup was sailed in the Med, the Melges 40 had their championships as did the Rolex Farr 40’s, also in Bermuda the J Class and Super-Yachts […]

“In this week’s WoW TV the long awaited 2017 Transpac starts with the fleet in a staggered start on the US mainland racing to Hawaii in hopefully record times. Phaedo 3 the maxi-Trimaran and mono Comanche will both be vying to break records and Comanche was in course to do so after setting a new […]

In this week’s WoW Comanche breaks the Transpac race record, Volvo Ocean Race looks at the unforgivving Ocean with great footage of past races, the Aussies reign supreme in the 470 Worlds, Michael Coxon CEO of North Sails Sydney “chats” with Geoff Waller of WoW TV about all things sailing, the beautiful Panerai Classic yachts […]

In this week’s WoW the Volvo Ocean Race is hotting up and we show how to build a a VOR 65, “This is Spindrift Racing” is a look at Donna Bertarelli and Yann Guichard Spindrift racing which runs six boats for four complementary projects: a trimaran MOD70 (Spindrift), a Decision 35 catamaran (Ladycat powered by […]

In this week’s WoW David Witt and crew have their first VOR 65 race in the 2017 Rolex Fastnet here is their experience, Australian Sailing Team were at the Hempel World Sailing Championships Aarhus Denmark test event, RC 44 Maarstrand Sweden and Team Nika had a great start on Day 1 finishing on top, Americas […]

Cycling meets Sailing, Caribbean 600 preview, a look at a VOR 65, Day 110 Vendee Globe, 2017 Australian Opti Champs, 2017 RORC Caribbean 600 Start. In this week’s WoW the gloves are off and all the 35th Americas Cup teams are launching their final race yachts and guess what? ETNZ pull a blinder with pedal […]

AC Crewman Overboard and Lucky, RORC Caribbean 600 Finishers, EFG Sailing Arabia Part 1, Finishers 12-15th Vendee Globe and the JJ Giltinan 18 Footer Championships In this week’s WoW Graeme Spence falls off the front of the Oracle Americas Cup defender into the path of the foiling fins and thankfully he survives the experience but […]

Foiling Laser, Conrad Colman home under Jury, Skip Novak Anchoring, Sydney Harbour Regatta, JJ Final Day of carnage In this week’s WoW the foiling Laser is rolled our and tested in the UK, the incredible Vendee Globe for Kiwi/Yank Conrad Colman came to an end after 780 miles under jury rig. Conrad’s story would make […]

Vendee Ends, Swans in “Paradise”, Act 1 of the Extremes, VG Virtual Regatta Winner and the 52’s in Miami. In this week’s WoW French Yachting Journalist Sébastien Destremau is the 18th and last boat home in the Vendee Globe solo around the world unassisted yacht race , the hardest sporting event in the world, Rolex […]

WMRT in OZ, New Boats and Female Sailors in VOR,Franck Cammas’s New AC Boat, TP52Royal Cup, RYA Dinghy Show and the J Class Yachts and Maltese Falcon in St Barths. In this week’s WoW the WMRT is on Perth Australia looking for the “Fremantle Doctor” and sometimes finding it, the teams for this year’s Volvo […]

ETNZ in Bermuda, Charleston Race Week, Norths’ Paul Westlake, Antigua Sailing Week, L’Hydroptere Revisited Last week in the sailing WoW finally all the teams are on the Great Sound in Bermuda as Emirates Team New Zealand jet in with their new “Pedal Powered” AC 50 and after putting it together they hit the water as […]